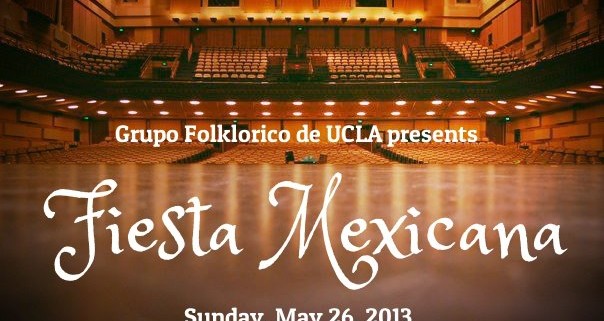 I never believed that folklórico would become such a big part of my college experience. But as I find myself nearing the end of my time here at UCLA, I find that my experience as a member of Grupo Folklórico de UCLA has become the biggest part of my last four years.

Grupo Folklórico de UCLA is a welcoming, student run dance group where experience is not necessary. Throughout the year students learn Mexican Folklore dances and prepare for a dance show that is to be performed at the famed Royce Hall. The group prides itself in being the only Latin group to perform at Royce Hall and, attendance has risen in the last three years.

Looking back, I see how important the group has been in forming the friendships and memories of my university years. Unlike the stereotypical college student leaving home for the first time, I never became wild my first year. Many people create lasting friendships with floor mates at the dorms. I didn’t. I tend to be very shy or uncomfortable in new environments and while meeting new people. Although I went to dinner or to Diddy Riese with some acquaintances I never really opened up to any of them.

In Folklórico, like any other club on campus, the intimacy of collaborating with the same small number of people allowed me to open up and begin to interact more with the members. My first year, with all those meal swipes, we would eat dinner together after practice, staying after to talk, make jokes, and plan days to the beach or the mall. Everyone knew everyone, and the performance at Royce reflected our hard work and closeness.

My second year more members came on board, and with that, more friends. For me, practice became less about learning the dances as well as I could and more about hanging with my friends, cracking jokes and messing up on our steps together. At Royce, I had the privilege of dancing for the first time with a live mariachi band. My parents brought friends to visit the school and to view the performance.

My experience with the group began to change my third year at UCLA. It dawned on me that the end of my college years were near. I began to branch out into other areas and form friendships other than those from dance. It was the first time I lived in an apartment on my own. However, that entitled that I had to work twenty hours a week to pay rent and for my  “chickles.” My work hours cut into practice, into performances, and into social events. Following my love of cinema, I began volunteering at the AFI Film Festival not allowing me time to dance in the yearly Día De Los Muertos performance because I had to be at the AFI school and in Hollywood for many days at a time.

While my involvement decline, the bright side, was that the group had become more popular and grew bigger. But my decreased involvement limited the number of people that I met and the dances that I performed at Royce.

Now, as I head into my final Royce Hall performance, my experience in the group is coming into focus. My current roommates are close friends that I made in Grupo. One of my friends and I have quarterly trips to the beach and the mall because whenever she “sees the water she has to touch it.” Elections for next year’s cabinet are coming up (an election where my opinion for the first time does not matter) and the group has more men then I have known it to have.

For the next few weeks this blog will describe the road to Grupo’s big Royce Performance on May 26th. I will describe everything from cramming the last few regions, the insanity of the senior dance, Royce nightmares, and the tequila shots of a night well done.

I am off…Royce mode is on.

SnapFotos: Art in the Streets

Fusion Food for a Fusion City

May Day at UCLA
Scroll to top