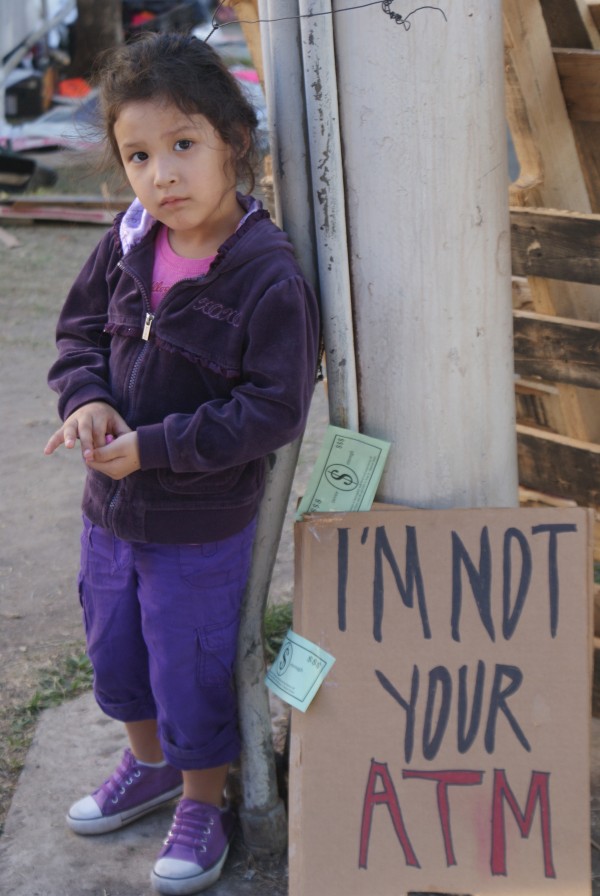 Activism can start at any age, protester Hailey Ava Lopez, 3, at the Occupy LA movement on October 16, 2011. Photo by Magaly Chavez.

The space of city hall is filled with hundreds of people looking for change. They want to change the corruption of greedy corporations slowly taking away the livelihood and dreams of the American people.

Spectators claim that protesters are fighting for “change,” but in reality do not know what they wish to change. The Occupy movement seems to be split into many different sections. People want multiple changes out of this movement, but the question is whether people will be able to come together to decide the change they truly want for America.

“There are too many different agendas from the Occupy LA movement, some of the changes people want are completely unrealistic. I myself want for the removal of any persuasion from politicians that being in monetary value, tangible object, or flesh. We need dedicated public servants, that is how we will begin to see a change in the entire system,” said a self-employed LA artist who wished to remain anonymous.

In 2010, Councilman Richard Alarcon proposed the Responsible Banking Initiative. The initiative is said to allow LA to score and judge financial institutions on their community investment and lending practices, allowing LA to evaluate whether that financial institution would benefit the community. The legislation stagnated on the council’s agenda. Occupy LA managed to push government officials to support their movement to take another look at Alarcon’s proposal as reported by the Huffington Post.

“What good does it do Los Angeles if the banks in which the bulk of our tax dollars sit in are reinvested in another City, far away?” said Councilman Richard Alarcon in his blog.

The Occupy LA movement has inspired Bruins to take the future of America into their own hands and fight for the 99%. In the past weeks a group of students have risen on campus, calling for Occupy UCLA.

“The Occupy UCLA movement is meant to politicize the student body of UCLA, and revive the spirit of activism on this campus to a level that rivals any other college in the nation. And in the process change our economic conditions in which we live and set a different course for our future,” said Byron Barahona, a third-year Political science student.

In a short period of time this group has grown and have called for action days on campus supporting “Bank Transfer Day.” A day created to cancel bank accounts with some of the big banks that were bailed out in 2008, and invest money in more local banks, and credit unions.

Overall the purpose of this group is to educate students about the movement, and to recruit students to be more politically involved, specifically within Occupy LA.

Past the politics and disagreements about the movement it is important to look at what the movement truly represents, all people being more involved in the actual problems of the nation.

A participant of Occupy LA states, “People are becoming more aware of the problems. Actually taking the initiative and paying attention, gaining more knowledge, instead of just listening to the media.”

Not only are people becoming active, but they are also putting aside their differences of religion, gender, class, and overall background to fight for what they truly believe is right, and take back America from the greedy corporations that have been suffocating the American Dream.

The Occupy movement represents stepping away from a feeling of apathy that has consumed our nation and to begin a new wave of dreams and hope.

May Day 2011: Where have all the hand-written signs gone?

LA CAUSA: Causing Students to Get Involved
Scroll to top