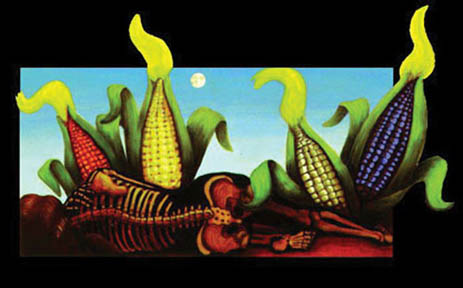 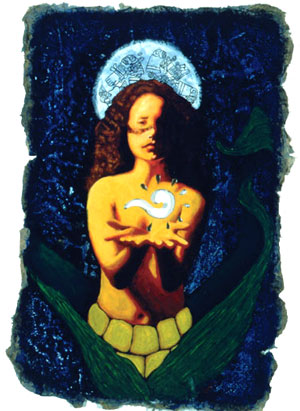 In 1997, Felicia Montes, studying world arts and cultures and Chicana/o studies at UCLA, wanted women artists to come together at a time where a powerful Chicana/o movement was happening in Northeast Highland Park. This led Montes to ask her professor to allow to her organize an event instead of writing a final paper. Only planned for one night, this event blossomed over 14 years into an organization of called Mujeres de Maiz (MdM).

“I was trying to make [my education] relevant [by] not just writing a paper but trying to do something,” said co-founder Felicia Montes.

The event was organized around International Women’s Day, where a local poetry collective band, In Lak Ech, decided to get together with anyone interested in sharing their work and poetry. “We were only supposed to perform once…but people kept asking. They had never seen the presence of women on stage [like that],” said Montes.

Just as corn is grown all around the world, mujeres of any color ranging from the lands South America, Africa, and the Philippines come together to “network and organize around global, social, and political issues,” as stated on their website.

A multimedia women’s art collective, MdM gives space for female artists who want to express themselves politically and spiritually through art, no matter their level of training.

Corn is peeled to expose its inner core in the same way that these women use their art. They find healing when expressing their inner thoughts and activist ideas to others while creating awareness of transnational issues.

MdM holds spoken word and cultural music performances, and showcases sculptures and paintings. They actively participate in events that support and celebrate women as well as helping to build different collaboratives.

Another outlet to contribute to women’s empowerment in the arts is their magazine publication “Zine.” “Not a lot of publications are out there consistently outreaching…so it was important to have that,” said Margaret Alarcon, a member of MdM.

As Alarcon recounts her decision to join MdM, she said that it has helped her empower her gift. An illustration student at the Art Center College of Design, she had a dream of a woman of corn. She decided to paint this image, which later became the symbol for the group.

Before MdM, Alarcon saw herself as an isolated artist; alone and unsure how to share her art with others. MdM gave her the validation and the empowerment she needed to share her creations. In her biography, Alarcon describes her art making as bringing new meaning and healing to her life. Now she is the core organizer for MdM.

The women plan to make MdM a nonprofit organization that will give the group more structure. However, they want to be cautious to preserve the grassroots atmosphere. They wish to have a place where women can express their ideas and form other groups in Los Angeles. “[This would be] very beneficial to the women who are trying to make art,” said Alarcon.

Just as the Mayans saw corn as sacred, MdM views women that same way. Both women and corn com in many shapes, sizes, and colors.

“Empowerment, consciousness, and healing,” are the words Co-founder Claudia Mercado uses to describe who they are and their contributions to the community. They outreach to women of color who want to combine their artistic kernels to help grow the organization that celebrates women, the arts, and activism.

As Montes wrote in her poem “Overcompensating Xicana Complex,” these women are planting their “seeds of resistance.”

20 Years of Building Hope Through Jobs
Scroll to top