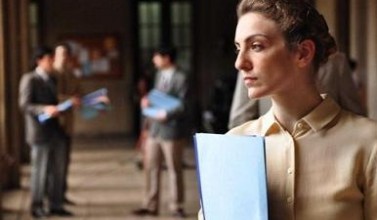 Set in Argentina, 1982, as the rigid military dictatorship declines in power, the inner conflicts of Maria Elena, a 23-year-old teacher’s assistant at a prestigious college, unfolds in this dramatic fiction. Marita embodies the educational institution’s ethic: clean cut, introverted, obedient, repressed. However, loneliness and hormones take over.

Using surveillance as her excuse, she obsesses over a student, spending time in the boy’s restroom in order to get a glimpse of him. When her sexual desires are awakened by curiosity, jealousy, and plain biological behaviors, she purchases the boy’s cologne and even sniffs his underwear during his swim class.

Beautifully crafted, this film presents a moving personal story about a repressed girl struggling with the meaning of personal freedom, paralleled with the crumbling military dictatorship in the background. The end of blind obedience, and the end of the dictatorship, brings a free but dangerous world to fruition. Those who take control of their own lives will be successful, but those trained under the “invisible eye” lack the skills and mindset to do so.

The creation of this film was an international effort, with credit to Argentina, Spain, and France. The story is adapted from Martin Kohan’s prize-winning novel “Moral Sciences” (2006). The film has been featured in several renowned film festivals around the world.

The Business of Entertainment, Breaking In and Succeeding

SnapFotos: Art in the Streets
Scroll to top