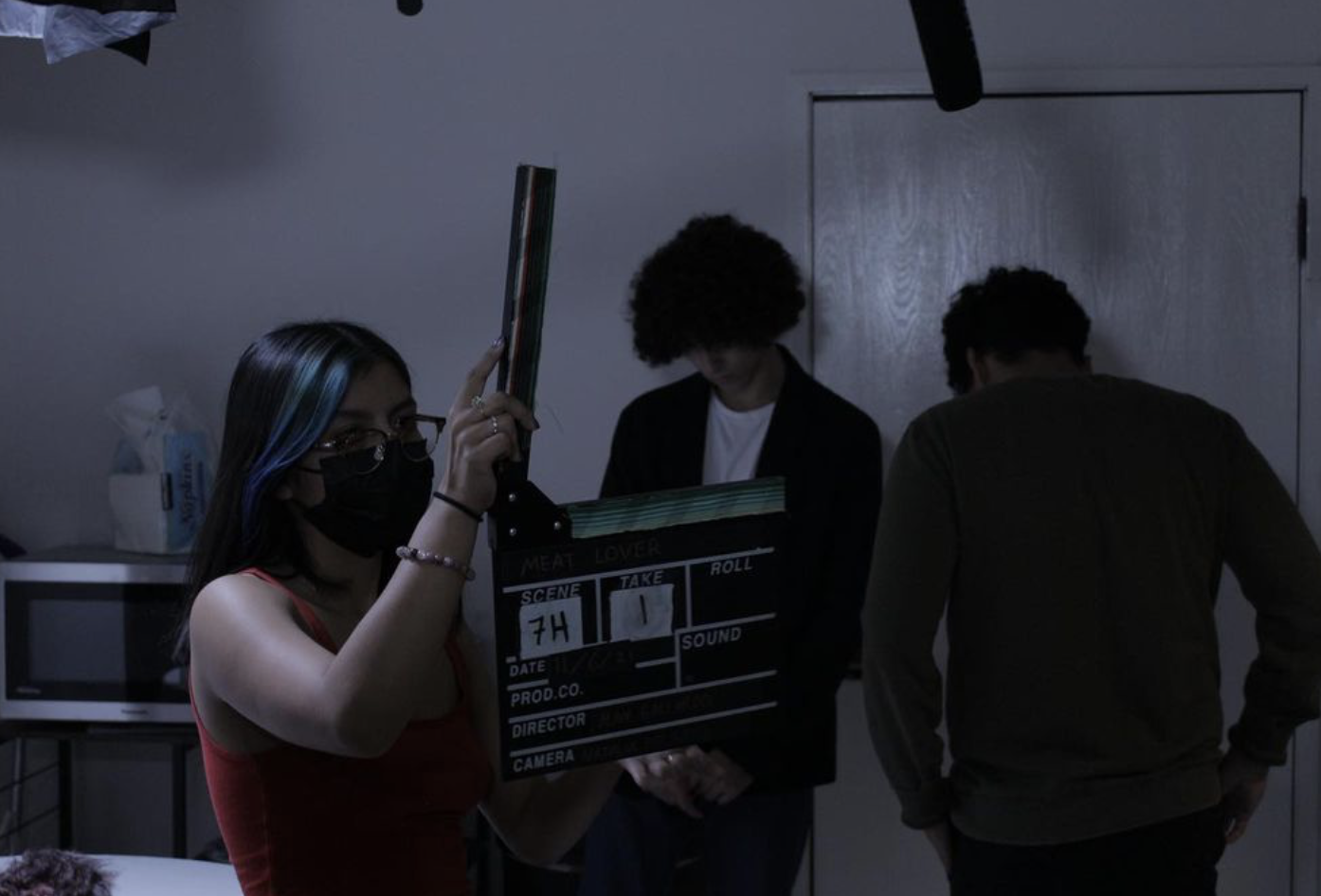 Image by: Emilio Gomez [From left to right, the picture features Karla Diego (holding the slate) and actors Vicente Cristo and Brayan Murguia]

Natalia Delgado and her grandfather were never the type of people to leave the theater right after the movie ended. Instead, they would watch the end credits and look for a symbol of hope within the accredited names.

“We would…look for names that were Latino….a lot of the times, we couldn’t really find many,” said Delgado, a junior and the Director of Operations and Co-Head of Productions of UCLA’s Latinx Film and Theatre Association.

Unfortunately, this is the reality for many Latinx individuals who dream of making it on the big screen. Despite our growing population, Latinx people remain largely–and unjustifiably–underrepresented in the entertainment industry.

According to a study from the USC Annenberg Inclusion Initiative, only seven percent of 2019’s top-grossing movies featured a Hispanic or Latinx lead or co-lead. Moreover, the study revealed that across 1,300 movies, a mere 5% of 51,158 speaking or named roles featured Hispanic and Latinx characters. These findings are disappointing and especially troubling considering that the Latinx community makes up 18.7% of the overall population in the United States.

At UCLA, the Latinx Film and Theatre Association (LFTA) works towards breaking down these barriers. LFTA provides a safe space for Latinx Bruins to share their stories through an artform they have been historically excluded from.

For Alan Gallardo, another third year and LFTA’s Director of Marketing and Co-Head of Productions, cultivating a sense of community within LFTA is crucial. Accordingly, members are encouraged to share opportunities with one another. “If one of us makes it, we all make it,” noted Gallardo about the inclusive environment LFTA fosters to help Latinx people overcome the obstacles they face within the film industry.

In line with their mission, LFTA does not require experience to join their organization. Delgado and Gallardo recognized that some Latinx students may not have had an opportunity to get into film and theatre. For instance, Delgado pointed out that although she has always been passionate about cinematography, production, and diversifying casts, she did not explore these interests until her senior year of high school.

“That’s mostly because I never saw anyone who looked like me…in this industry,” Delgado said, explaining why she didn’t get involved earlier. Being represented on screen or on the stage and identifying with characters that mirror one’s own experiences can be pivotal in the decision to pursue these interests.

For Delgado and Gallardo, it was crucial to see people who looked like them in the movies they watched. From Beverly Hills Chihuahua to The Book of Life, Latinx-centered films served as a source of inspiration for the Co-Heads of Production–and surely for others within our communities–to pursue their goals.

However, even in films that serve as a source of inspiration because of their Latinx representation, harmful stereotypes are still perpetuated. These damaging tropes are seen in the top-billed movies of 2019 wherein 39.5% of Hispanic/Latinx actors played criminals, 8.5% were immigrants, 30.5% spoke English with an accent, and 16% were sexualized. More often than not, Gallardo found that stories that are written about Latinx people are traumatic or stereotypical. In order to remedy this patterned narrative, Gallardo plans on writing and directing his own films and TV shows.

“I just want to see stories written by us,” Delgado added, “not necessarily always trauma stories, although some of those stories are important to tell. But [rather], stories about Latino scientists… like Latino bada**es.”

While calling for more Latinx representation on screen is important, it’s just as important to voice the desire for these stories to be written, produced, and directed by Latinx individuals.

From 2007 to 2019, Hispanic or Latinx directors worked on a mere 4.2% of America’s 1,300 top-grossing films. Similarly, only 3% of producers on those same films were Hispanic/Latinx. Unsurprisingly, the disparity is even more prevalent among women; only three of 1,447 directors were Hispanic women or Latina–Patricia Riggen, Melina Matsoukas, and Roxann Dawson. Notably, the USC Annenberg Inclusion Initiative study found a direct relationship between films with Latinx directors and Latinx characters. Fixing the lack of representation behind the film is instrumental in rectifying the disparity that exists on screen.

In light of these statistics, Delgado and Gallardo emphasized that they want LFTA to be a place where Latinx Bruins can freely exercise their creativity.

Founded 15 years ago, LFTA remains committed to fostering an atmosphere conducive to Latinx artistic expression. During the fully remote portion of the ongoing COVID-19 pandemic, they held projects over Zoom to ensure that students had a creative outlet. Likewise, the organization has provided members with the opportunity to create short-films, make podcasts, and showcase their art.

For instance, Gallardo directed his first film, “Meat Lover,” his freshman year. “Meat Lover” is a horror film that follows a man who desires to satisfy his insatiable hunger for meat so much so that he resorts to eating human meat. When recounting his experience, Gallardo highlighted how the deadly short film served as the first bout of exposure to the film process for more than half of LFTA’s members. According to Delgado, “They killed it!”

The short film caught attention after LFTA uploaded a Tiktok of the crew behind-the-scenes. Beyond the video amassing over one million views, Delgado and Gallardo were thrilled by the positive feedback from viewers.

For example, they received comments from fellow Latinx individuals interested in film and theatre who were inspired by the organization; “[There were] people from schools all over the country, and they’re just like, ’I’m a Latino, and I’m going to film school,’” added Delgado, “it [can feel] so isolating being the only Latino, and they’re commenting on how they felt so empowered by our org…that was just so good to hear.” It is clear that LFTA is making an impact that transcends beyond the UCLA campus.

Apart from its work on short films, LFTA holds various events such as Night of Cultura, a live-theatre event with the goal of celebrating Latin culture. LFTA also has a Youtube channel with content ranging from reaction videos to podcasts, such as Pod of Cultura.

To Latinx people interested in pursuing film and theatre, Gallardo put it simply: “Just do it…do whatever you can….it’s going to be worth it when you find your community.”

LFTA will be hosting its annual Night of Cultura on May 6th and 7th of 2022 in the Northwest Campus Auditorium. To keep up with LFTA and its upcoming events, follow them on Instagram @lftaucla, Tiktok @lfta_toks, and Youtube @Latinx Film and Theatre Association.

Any use of “Latino” as an identifier is kept to maintain the accuracy of quoted material.

Life of a Stray

The Power of Counter-Storytelling: Honoring the History of Marginalized Com...

How the COVID-19 Pandemic Has Impacted College Enrollment among Latinx Stud...
Scroll to top