Imagine how it would feel if the writing on street signs and businesses was indecipherable. This is a reality for over 200,000 Spanish-speaking immigrants in Los Angeles County alone, and an estimated 2 million people nationwide.

At Centro Latino for Literacy, staff and volunteers help Latino immigrants gain basic literacy in Spanish with the goal of preparing students for English as a Second Language (ESL) classes. Founded in 1991, Centro Latino has helped over 7,000 low-income Latinos read and write in Spanish, as well as gain functional literacy in areas like math, computers, finances, and health. Despite pressure to immediately teach immigrants to read and write in English, literacy in one’s native language facilitates a stronger cognitive foundation, making it considerably easier to transfer reading and writing skills to a second language. As a result, teaching native Spanish speakers how to read and write in their own language is a vital step for ESL programs. 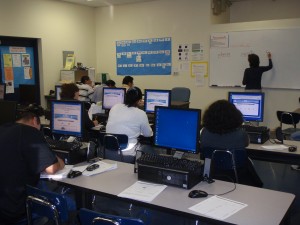 Writing one’s name is a crucial skill many of Centro Latino’s students did not have the opportunity to learn in their country of birth. The beginning course, Leamos (‘let’s read’), starts by teaching students to first recognize and write individual letters, then syllables, and eventually read words and sentences. Using an internet-based program, each student moves at his/her own pace following audio instructions. Key words frame each lesson, starting with “educación,” a witty example of all five vowels in one word. It takes about 100-120 hours to complete the 43-lesson curriculum in Leamos, both a rapid and impressive feat. Once students graduate from Leamos, they enter the Funcional class where they learn basic functional literacy, and finally progress to ESL classes.

In 2008 Centro Latino launched “10×10,” a campaign to reach 10,000 people by the end of 2010. Since many are unable to reach the Pico-Union headquarters, the campaign aims to bring the literacy program to the people, raising program awareness and launching new school sites in classrooms ranging from Van Nuys to Long Beach. With the widespread access of the internet, Leamos has even expanded to parts of Mexico. 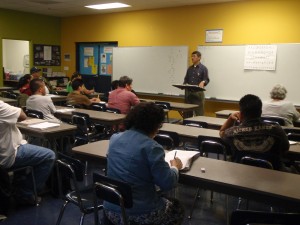 Centro Latino is not just a place to learn literacy, but a place to develop personal confidence and self-esteem. The school takes pride in its community atmosphere and its graduates often return as volunteers and mentors. Through the program, students learn to acknowledge their role as leaders in the community. “They don’t see themselves as teachers, but they’re already leaders in their households,” says Veronica Flores, Centro Latino’s Programs & Community Engagement Manager. “I don’t like to use the word empower,” Flores explains, “they have it all themselves. Our hope is that by teaching them to read and write they can uplift themselves.”

And they have. Born in Honduras and an immigrant of over 30 years, Mercedes Meza picked up English working as a housecleaner, but was unable to read and write in Spanish until her graduation from Centro Latino. A poster-child for Centro Latino, she proclaims, “Today I feel stronger than ever before.”

Yo, Affirmative Action Bake Sale! How much for a mutt like me?
0 replies

My Story: Latina and Lesbian

UCLA Students Reach Out to Latino Cyclists
Scroll to top