Since La Gente newsmagazine printed a review of Nortec Collective’s “Tijuana Sessions Vol. 3” in spring of 2006, the group has entered into new territory receiving the 2009 Grammy nominations for Best Alternative Album and Best Recording Package. The five-member group has since become four and has has opted to split their act into smaller collaborations instead of performing together. Here is a quick recap.

Nortec, the musical style, blends electronic beats with the rhythms of Mexican norteño, banda, and tambora music. The name is a combination of norte, referring to northern Mexico (not norteño, as commonly thought) and techno. Nortec music exploded onto the Tijuana underground music scene in 1999 after Ramón Amezcua, under the stage name Bostich, digitally processed a sampler of drum, tuba, and accordion recordings to produce the dance hit “Polris.”

Fellow music producers creating more tracks that Bostich, Fussible (Pepe Mogt) and producer Melo Ruiz compiled into “The Nor-tec Sampler.” Thus Nortec Collective was born. However, there is more to Nortec Collective than innovative music; at its heart is the spirit of collaboration. “With the Collective, we invited a bunch musicians and artists to collaborate,” Mogt said in an interview with Guanabee.com. “We created Nortec to be part of an aesthetic, not only the music, but graphic design, as well.”

Colectivo Visual (Visual Collective), a group of designers and video performances artists, take care of the visuals of Nortec’s live shows as a compliment to the music. The resulting aesthetic is an amalgamation of graphic design, animation, short films, creative lighting and of course, Nortec music.

Undoubtedly, Nortec Collective’s productions require elaborate technology. “Nortec has always been creating music based on the technologies available,” Bostich said in an interview with La Gente. They use technology such as the Tenori-on, a handheld interface that programs musical notes into LED switches,a fruitful decision, for in 2008, they received yet another Grammy nomination for the album “Tijuana Sound Machine by Nortec Collective Presents: Bostich and Fussible” (Nacional Records).

While electronic beats are standard for each song, Nortec Collective “essentially will always be an instrumental Norteño-Electronic collaboration, ” Bostich said to La Gente. “If we were to mix in Mariachi, for example, our music would seem fake. Although our music will always be electronic, we will continue to use live instruments to bring about the Tijuana soundtrack that has been our lives.” 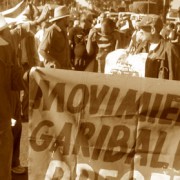 “This Is Our Land”: Grassroots Climate Activists Head to Cancun