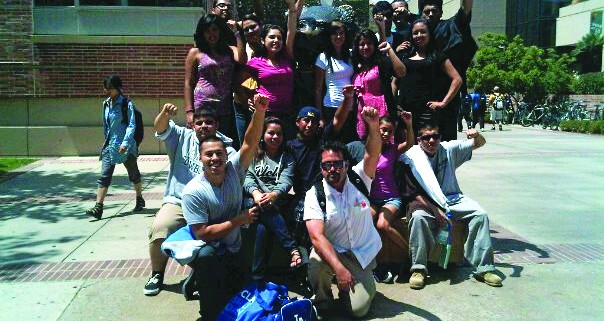 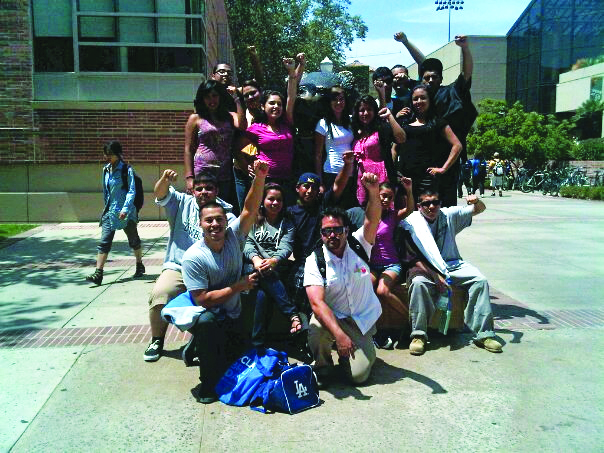 Little Frankie wrote his first essay at age 16. He was so proud, “Can I print it out? I want to show my mom.”

After being pushed out of the LAUSD public school system, Little Frankie ended up at Los Angeles Communities Advocating for Unity, Social Justice, and Action (LA CAUSA), an alternative charter high school in East Los Angeles, to not only finish his high school diploma, but to be introduced to the possibility of going to college.

LA CAUSA from its origins has implemented a different environment and curriculum that is relevant and beneficial to the community. As stated in their mission statement, LA CAUSA “engages historically disenfranchised young people and their families from East Los Angeles to take action against the injustices that impact low-income communities of color.”

Alejandro Covarrubias, now a professor in the UCLA César E. Chavez Department of Chicana/o Studies, was the first executive director of LA CAUSA. “LA CAUSA was more than just a school, I know right now it’s running primarily as a school, but it has always be seen as a creative center that is interested in developing local leadership so then those young people can become active members of actions for change in their own community,” he said.

The culturally relevant curriculum has been essential to create active members of change. The curriculum includes topics such as the prison industrial complex and oppressive relations of power. As professor Covarrubias states, “Education is ultimately about getting people to understand their reality so they can contribute positively to their reality.”

Ely Flores, a 2005 graduate of LA CAUSA, agrees. After facing 3 years of prison and waiting for the arrival of his baby, he came to LA CAUSA and graduated. He now works full time bringing solar and renewal energy to low income communities with GRID Alternative. He has also started his own non-profit organization, Leadership through Empowerment, Action, and Dialogue (LEAD), where he educates youth about public policy.

LA CAUSA takes advantage of its close-knit environment. The current executive director Robert Zardeneta states, “We actively went out and recruited these students to become reengaged in their education. We are a small enough school that we can do that.”

Currently, LA CAUSA has 147 students enrolled. But will it get bigger and replicate problems such as over crowdedness?

“Internally, we have battled with the question of ‘when are we getting too big?’ So now I think that from where we are is as big as we should get before we break off into other satellite programs,” said Zardeneta. He added that they plan on creating programs in Boyle Heights and other parts of East LA because “every community needs a LA CAUSA”

LA CAUSA’s focus has shifted to getting students exposed to college with the goal for them to apply to college. To do this, LA CAUSA has partnered up with local colleges and universities such as UCLA, LA Trade Tech and CSULA, giving their students the opportunity to get college credit while at LA CAUSA.

Robert Zardeneta exclaims, “What’s more radical than taking a young person who is a ‘drop out’ and bringing them to CSULA? To me that’s pretty radical.”

The new College Career Center has been beneficial for the shift of college readiness to take place. Rogelio Medina, the director of Post Secondary Education and the College Career Center, felt it was a disservice not to implement career development and college awareness into the program.

Medina credits the establishment of the College Career Center to the community leadership group called Presente. This group of students was first established as a Community Leadership Project (CLP).  Presente’s mission was to get everyone at LA CAUSA to graduate. “This group was the one who led the movement in LA CAUSA to promote college and graduation,” said Medina.

In  2009, Secretary of Labor Hilda Solis visited this community leadership project, prompting awards from the White House. After that, Rogelio made the moves to open the College Career Center. Rogelio says, “This is were you see the genius of having young people in charge. They go large. These young people are powerful.”

Though LA CAUSA has undergone many changes since its early days, the main priority is still the same: offer the community what other public schools have not succeeded.

Professor Covarrubias states, “When you work with a population, your responsibility as an organization is to ensure that that population feels served by your organization. Schools should do that as well.”