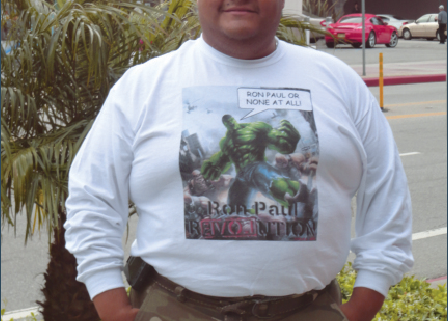 Despite arriving in the States as a single parent with only two dollars to her name,unable to speak a word of English, and without papers, Eusebio Preciado’s mother worked three jobs to support her family. Although she was ineligible for welfare, according to Eusebio she wouldn’t have accepted it anyway, adamantly having believed it to be akin to stealing. Eusebio takes his mother’s narrative as proof that welfare is an unnecessary burden on society as a whole and a hindrance to individual prosperity.

Amidst the crowds of curious students and die-hard supporters at last month’s Ron Paul rally, stood Eusebio, calling out to passersby as he fervently endeavored to spread Paul’s political vision to the masses. An active volunteer for the Ron Paul campaign, he commits most of his free time to advocacy work in his local area and making phone calls on behalf of Paul’s campaign. Firmly believing that direct democracy and self-determination for the Latino community will never come about through the efforts of either major American political party, 40-year-old Eusebio Preciado has been a devoted Ron Paul supporter ever since the unorthodox conservative politician’s first bid for the presidency back in 2008.

One of Paul’s initiatives that resonates with Eusebio is the elimination of the social safety net, or welfare. Critical of the “food stamp trap,” he believes these types of relief policies impinge upon the freedom and empowerment of the Latino community, “People end up being in the system for the rest of their lives.”

In Eusebio’s model of Latino empowerment, success and prosperity come from “relying on yourself, your neighbors, and your community.” Central to his political philosophy is the notion that as the common people, “We have forgotten the power we have. We are the power.”

As a dual Mexican-U.S citizen who has often traveled back and forth between the two countries, Eusebio has an intimate understanding of the immigration issue. In fact, for Eusebio it is a “non-issue” since immigrants are no longer coming because of the economy.

“Immigration is not a problem. Whenever we have a good economy, we want immigrants. We need immigrants whether illegal or not for the benefit of America. [But] people have been lied to by the politicians. They always blame the immigrants. Immigration is the boogeyman,” said Eusebio.

Eusebio believes the sole motivation for immigrants to come to the states is simply the drive to work but “Americans seem to believe that everybody is coming over here for free crap.  It’s for the opportunities.” According to Eusebio, the same exact welfare system exists in Mexico, “[But] over there it’s a stigma [food stamps and medicare]. People don’t look down on you for being poor, they look down on you for not being able to take care of yourself.”

Considering the Dream Act, Eusebio said, “People who want legal status should do something for it. I think that should be enough that should be their reward as long as they give back to society.”

Although the majority of the Latino community believes that the Democratic Party is more concerned with its interests than the GOP, for Eusebio Preciado, there is no major difference between both parties.

“The same bankers that supported Obama are supporting Romney,” said Eusebio, reflecting on the upcoming presidential election. While Eusebio viewed the beginning of Obama’s presidency as satisfactory, he became disillusioned by his failure “to keep campaign promises,” referring to the prolonged withdrawal of troops from the Middle-East as one of his primary criticisms.

With the upcoming election, Eusebio continues to labor under the Ron Paul campaign, hoping to take American politics and the Latino community in an uncharted direction.

What is your political point of view?

Latino’s Eating Habits Survey: Is Vegetarianism part of it?

Daring Music for the Silenced Voices of Latin America
0 replies